CCXLV
Convict’d by a measure, the adamant refusal of. Recall that Virgil
perish’d of sunstroke
Whilst voyaging through Greece with the emperor Augustus, and so
Flee the mercantile city, the offerings of. No truck with the temporal
big yahoos, no greenback-
Primed ingress into urban finisterre regions blank. Better
to keep a few honeybees,
Walk the woodlots daily, and write down for the rabble of ex-
legionnaires some rudiments of the kitchen
Garden and how to slit the boll and inclose the bastard plum slip
in the trunk of the apricot tree.
A terribly shy man, he talk’d as if untongue’d, got nearly kill’d in a land
dispute with a centurion named Arion.

The débâcle of its verse, puny and vexatious, is what the glut
demand’d, sassy impermanence
In a hat cover’d with orchidaceous welts that used to be flowers,
Cover’d with noise-booty, belabor’d conceits cold-cock’d by bystander
news reports, cover’d with
Zoological specimens reject’d by the imperial kitchens. No stamina,
no querulousness, no
Brass, all the gloze-Jove wantonness of the jerkwater gloxinia,
the bloom-prithee plant,
The smarm-flower. The age of hats exchangeable, oil’d and sex’d
and opulent, village concertina hats, jazz racketeer hats, pantomime
Poverty hats, hat of the Detroit hussar, hat of high
intent, hat matchlessness, hat without qualities, Joe Hat, pre-
planned hatlessness.

Just how perfectly distract’d is a possible? Up to a voice crass-rasping out something like “Sullivan iss a bore, mit hiss rack and pinion diagrams, mit hiss convolvulus in retrograde, bindweed in detox, Sullivan iss a bore.” Something like that. Half Berryman, half Hanna Schygulla. Accompany’d me through shower and teeth. And commenced me to consider—again—a William Fuller poem with something something a mutual “right basinski” in it, a “move” of hoisting a proper noun to a common noun that continues to wow me: see “finisterre” en haut. Though, too, there’s Hugh Kenner—brasher, l’écriture moins stylisée in Gnomon than in the later books?—writing (in “Ezra Pound and the Light of France”):

One doesn’t “learn” by acquiring other people’s tricks with language. Pound made the distinction in a 1913 letter to Harriet Monroe:

. . . there are few enough people who know anything beyond Verlaine and Baudelaire—neither of whom is the least use—pedagogically, I mean. They beget imitation and one can learn nothing from them. Whereas Gautier and de Gourmont carry forward the art itself and the only way one can imitate them is by making more profound your knowledge of the very marrow of art.

This juxtaposition of two poets with detachable mannerisms and two poets who “carry forward the art itself” defines the criterion by which Pound has always picked masters. It should be considered along with another formulation: “I revere good sense much more than originality.”

And Kenner makes note how “An artist’s mannerisms are excrescences of his personality or his period; the Verlaine or Baudelaire whose very center is a mannerism of the sensibility is, however genuine, the most dangerous of models. You can learn nothing from Verlaine except how to be Verlaine.” (You can learn nothing from the Language boys or “the FlarfCo® product”—or, say, Velveeta—except how to be a Language boy, &c.) So “we” come to the present impasse: glut of imitants in a drizzle, extravagant to advance, banging loudly with industry. Nobody in the quiet pits.

Gone fishing for a drop of dew. Ginger gum, to break
mercury trade. Madness and ignorance feed on whey. To
be got keep a little dryness at core. I was strange and no
one could cope with me.

Here I am, a pitiful, ill-tuned song. So dimly seen, the poor
canaries, methane and miniver. Head more tired than I can
say. Throat buckles today.

Down on the gully bank, I’ll be happy. My head is nailed on
at the top. There is a seacoast inside of me. The sun is red,
with an indigo heart.

Which, miniature Stevensesqueries, delight. Small is a solace. 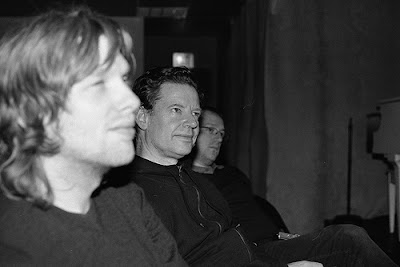