As a hat and an adult duiaper while he drivshis ark to the king
dome of his peers he swears his years are melting away in america’s
melting pot whose strs and stripes are smeared with the other warpaints
ion his cherokee cheekbones he is a black hassid in hiding from his village
elders who cheriub his butts with anointing oiuls and pigmeants from the chief
mospuito by the creek with no name burning boiling oil.


“Typos” / variant spellings / simultaneities (trying to write two words directly to avoid the way reading effects a hierarchic seriality, an “order” of time and event). See pigments, pigmeat, mean, meat colliding in the word “pigmeants.” Poem as a canister throwing off uncontainable sparks. I note, too, in Virgil’s Cow a highly refined typography—one hardly reproduced here. “James Brown” (the title is italicized, the hair-lines mark’d) is print’d in a smaller near-agate type. Where a serif’d type dominates, one poem—“IM: The Robot Geisha”—appears in typewriter-style Courier. A number of pieces hug the right margin. A few untitled works accompany an initial Hebrew version: no way of determining if one is “original,” the other “translation.” Occasional symbol gimcrackry intercedes (see, in “Here Lies Thought,” “summoning ouir potentioner’s phalanx / . . . . . .       . . . . . of n=oble mathematicians . . ., / muttering our calculus under starry skies.”) The effect is a continual upsetting of the norms of intention (Goodwin as Basquiat: how interpret an idiosyncratic code? Marks of “personal” meaning, or trace “societal” detritus, its jisms and negligible-jams. Or marks of a toss-off style-“commitment”: Ça m’est egal, you fix it up if it bothers you.”) Here’s another:

It’s cold at midnight by Fitzgerald Shipyard @ the end of
Winnisimmet. Las putas stroll by the old water hole and propane
tanks. The D.P.W mounds its


arsenic-laced pillar of white salt. The freighters steam under
the Tobin & Winnisimmet like thugs surrounded by a
mob of red tugs. The produce section

rots in a refrigerator w/ the strippers @ St. Arthur’s Court.
“The wolf of winter will soon be at our throats,” one
besotted otter throws out

while Richard Brautigan puts down his cerveza
and walks out the door /,\ trolling
in the gutter for rainbow trout <++++

What is that fishlike appendage at the end? The piece is largely a kind of mean streets depicting à la August Kleinzahler, say, or any number of talent’d depicters. The difference: something like “one / besotted otter throws out”—that willingness to allow sound’s cartoonry its place. It jams the transmission, betrays the Oz behind the material curtain, turns, momentarily, the reader into that “arsenic-laced” pillar of salt. (The few weaker pieces in the book fail exactly in proportion to a refusal of such jamming, the “merely” scenic, or scenic with a gooey dollop of irony’s gravy—“McLean Hospital” is one.) Here’s “Cannibal Rector”:

I am sitting on a barge going downstream to Robert Mitchum’s
house. Gamelan thimble cymbals adore my fleas.       All of

across the keys. The screen crackles for an instant
in the living room. i am d us ting for finger prints.

I keep thinking of various “misfits” (to put one possible name to a long-standing honorable tradition of those who refuse to be “bunch’d,” singularities, cranks, delinquents, saints, &c.) that Frederick Farryl Goodwin’s work may (or may not) show kinship with. Carl Martin, Alfred Starr Hamilton, John Wieners, Jack Spicer, Amelia Rosselli, Laure (pseudonym of Colette Peignot), maybe Martin Corless-Smith, maybe Michael Haslam, maybe Jeff Clark (he design’d Virgil’s Cow,—largish format and trademark bleeds and blacks—hence an untoward preternatural presence). I am sure there are others. Some astoundingly different register to the way of seeing. Hints of that here: “the honey in the lion.” Goodwin is capable, too, of nearly unbearable restraint, a methodical discernment of shivery particulars:

There is a grand river running       through the disposition
of my faith. For I have seen rich men die at their desks,

of heart attacks, and carry on like ghosts through generations.
It is as it should be. Quiet.       In the stalls. The immortals tread

elsewhere. It is their right. I count loose change in words
Drink the beverage of the sky.       Carry on with a farmer’s

work. Mucking out the I.

New likely candidate for defining what all writing is, or ought be: “mucking out the I.” The piece previous to “Double Zero Land”—one call’d “Anchors”—begins: “I was drinking the sky through a straw. Blue sky / and the din of Montana.” That Spicerean recycling of image. The temptation is to continue saying, rather dumbfoundedly, “Look! Look here!” Three one-line poems (checking the listing of contents, there’s a sense of mergers and indistinct (recklessness with boundaries) to the book; several untitled pieces and the typographic burps add to it):

The roots going below ground to Beowulf. Green harvested from beets. The willow out back dies a slow death. Branch by branch.

Vitek Spacek pounding on the door with Polish day glow hair. Which concealed a thing still emerging from ice.

You know it’s not you they’re coming for this time. I am moved to comment on the killing of a man.

Rather like some of Frank O’Hara’s late (mostly) one-line excursuses in “The Sentimental Units,” or “Biographia Letteraria,” or “The Anthology of Lonely Days.” (Or John Ashbery’s “37 Haiku”?) What is the relationship between the items? Is there a whole “potentioner’s phalanx”—a tradition—of one-liners (titled or not) chain’d one to another, sparking off new chains? What difference did it make in reading Virgil’s Cow that I took the epigraph’d lines—“Certain she heard the words—a human voice; / she saw a bird. And then she counted nine, / all talking crows . . .”—to read “talking cows” and to come out of Virgil, not Ovid. Belated death of a literalist. Read it. 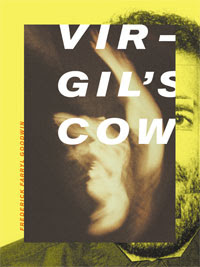 CCX
Big Mecca flop-
down, just my
fucking luck. Or
some fundamentally post-
rational evangelical meemies
with a saw-
horse prop’d table
of “literature.” Inconsequential
words go up,
dispers’d by the
piercingly blue gramophonic
sky. Call it
prayer, call it
a tremulous rhythm
against “lamentable rheum.”
I am of
the hack-saw
and pliers bunch
that sees unfetter’d
the doctoring up
of the supra-
seemly celestial roar
in stock mock-
courtly religious hoo-
hah, its class-
freight’d masques, its
lyre and parasol
units. Thin-gruel’d
ritual shit. Shall
we gather at
the water trough,
hoof-pock the
muck and plunge
mangle-horn’d in,
balling like cows?
Consensual solitary grunts
and attainments, hick
victuals, clean meanness:
a coil of
green garden hose
spout’d up at
the unextinguishable sun.