Roland Barthes, out of The Preparation of the Novel (Columbia University Press, 2011), talking of the epiphanic haiku-like “Incident,” an “instantly meaningful event (cf. Nietzsche, Will to Power: “There are no ‘facts-in-themselves,’ for a sense must always be projected into them before there can be ‘facts’”)” with

. . . no pretention to a general, systematic, doctrinal meaning → which is probably why there’s a refusal of discourse, a retreat into the “fold” (incident), the discontinuous fragment—cf. what Ellmann, Joyce’s biographer, says about Epiphanies and their homogeneity with the modern Novel: a technique that’s “arrogant yet humble, it claims importance by claiming nothing.”

Barthes points to “the constraint of no-commentary; apropos of Joyce: the (epiphanic) technique “seeks a presentation so penetrating that any comment from the author would be an intrusion”:

Once again: in the West, we are overwhelmingly conditioned to furnish every reported fact with the alibi of an interpretation: culture of Priests; we interpret, we’re incapable of tolerating short forms of language (in the sense of ending abruptly, of “it’s a bit on the short side, young man”).

Subsequent talk of Joyce’s “failure and the transformation of this failure”—how he’d needed “to pour the Epiphanies into the Novel, to drown what we find intolerable about what’s brief, short in narrative: calming, reassuring mediation, elaboration of a grand meaning (Destiny).”

Two pieces out of Joyce’s Epiphanies (“written on green oval leaves, deeply deep, copies to be sent if you died to all the great libraries of the world, including Alexandria? Someone was to read them there after a few thousand years, a mahamanvantara. Pico della Mirandola like. Ay, very like a whale. When one reads these strange pages of one long gone one feels that one is at one with one who once . . .” –Ulysses). Ellmann writes: “In the years between 1901-02 and 1904 Joyce recorded crucial fragments of overheard dialogue or personal mediation. He carefully hoarded these fragments, and later—when he had determined their ‘spiritual’ significance—incorporated many of them into his fictions”—as if the bigger intent indubitably inhered in the quiddity of each incident . . . Joyce:

Two mourners push on through the crowd. The girl, one hand catching the woman’s skirt, runs in advance. The girl’s face is the face of a fish, discoloured and oblique-eyed; the woman’s face is small and square, the face of a bargainer. The girl, her mouth distorted, looks up at the woman to see if it is time to cry; the woman, settling a flat bonnet, hurries on towards the mortuary chapel.

[Dublin: in the National Library]
Skeffington—I was sorry to hear of the death of your brother . . . sorry we didn’t know in time . . . to have been at the funeral . . . 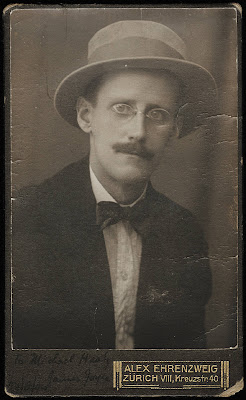