18
The customary thing is sampling,
Plucking a berry here, dipping
A cracker there. Bandy wattles.
It allows any kind of
Linear fervency to dispel itself
Prior to its getting up
A full “head” of steam.
Gothic spinster flinch. The way
Is clear’d for waywardness, broken-
Field running, a global “turf”
Of shatter’d connectives. Nervous
Unhappy driving. No more bludgeoning
One’s “head” against a barn-
Door of a village sandlot
Where the boys who paint’d
The strike zone went off
To Korea and the college
Dean lost it. Vatic fanny.
Allegory stitches a lousy shirt.
The lad counterfeit’d the Abbess.
Or a monk with literary
Ambitions who is tampering with
A text that’s come down
Ages of reckless tampering, that
Kind of nourishment language needs,
Translating slant energies bound in,
Out, the ones nodding off
In a surplice. To add
A surplus to the hoard-
Dormant, like a hunger. She,
Who sometime did me, seeks
Me not . . .
Going all the way to North Farm with a caveat, in a Cadillac. That panther is red and all eye, a formidable focus just where that chop’d off ear, caught one day in a trap’s doughty mechanism, carries its scar like a trace, or a flag. One paw, the right, curries power in detachment, stretches out easy, equals the cat’s sizeable belidd’d gaze. Claw like an eye. 1949. Is elected class poet. Wary be the flex unretractable. The essential is about to pounce, unkillably. Or a day arrives out of nowhere like a pencil in the mail and deposits itself in one’s fist. Like a book in the mail and lands in one’s lap. A legal pencil a really legal pencil is incredible, it fastens the whole strong iron wire calendar. Is how Gertrude Stein puts it, with a husky chuckle. (Scott Fitzgerald, whom she never “warmed to,” had a laugh like a loon.
Colicky gutter noise and wind-
Wash, sashaying in with rain.
The bent percepts of half-
Reverie scowling. You contemplate the
Burned black mail before an
Illegible audience of water, some
Undefined corrosive spirit the likely
Culprit in this old world
of mental defectives and coots. A chrome Blake bust. My one pronouncement: “I done had my fill of spurious science ‘and its representatives.’” So the high country trek industry heaves up briefly and readjusts, like a dying ember. So we go lax behind privet hedges, our unholy Buick. Laughter is my daughter, is “general” all about Fort Bragg. Smitten, one lances the musts and autumn itself, its cumber and reft.
There’s a fine juicy concoctive
“Root” to dissembling, just ask
The grammarians of Port Royal.
Just ask Palladius on Husbandry,
Who recommends the loosening and
Removal of soil around the
Tree—“Ablaquiate hem deep or
Make hem bare.” And that,
The housewife in me says,
Is that. Alluding beyond vague
Colors, flagrant and ill-assorted, beyond
The solid-looking girls I
Mean “stolid,” a word hardly
Occurring prior to the nineteenth
Century. It’s that kind of
Day, an “Apelike, I all
Thinges imitate” kind of viability
Lacking in the air itself. One
Is less waylaid than one
Thinks if one thinks about
It, and thinking itself puts
Out runners in a thousand
Djinn-scrambling ways in order
To thwart recovery and its
Mayhem imperturbable. A funny way
To put it. Runners being
A kind of root. As if
Junk junk’d its own junk,
Or bunk bunk’d with buncombe.
One year (1652) “flapse” meant
“An impudent fellow.” The everyday
Is madness the way language
Is madness, both bang at
The door constantly, abettors and
Instigators, willing to commit any
Offense.

Out of George Steiner’s After Babel: “Language . . . is the most salient model of Heraclitean flux. It alters at every moment in perceived time. The sum of linguistic events is not only increased but qualified by each new event. If they occur in temporal sequence, no two statements are perfectly identical. Though homologous, they interact.” And: “The style of the ‘language-centered’ American writers (as, too, with a completely different and antagonistic set of stylings, that of what’s been vagrantly—that is, pejoratively—termed ‘Official Verse Culture’), with its odd conjuncts, its ‘torques,’ its modish prose blocks and artless spatterings, is both a code for mutual recognition—‘indeterminacy’ is worn like a badge, a sign of outlaw credibility—and an instrument of ironic exclusion. It communicates from outside, enmeshing the actual unit of information, often inoperative or conventionally banal, in a network of superfluous linguistic matter. But this redundancy is itself functional: one speaks most completely to one’s readers—the meta-lingual trappings are most expressive of status, innuendo, and power. The vague fragmentary clatterings and meagrely elided theoretical claims of readerly (‘writerly’ in semiotician Roland Barthes’s useful, though confusing, term) ‘empowerment’ are not addressed so much to the common reader (all readers being, in fact, uncommon) as to one’s ‘language writing’ comrades, who will recognize in them signals of complicity. Here style is a weapon and a vengeance, words appropriated and suborned.” Thus the polymath. “Thus the polymath.” 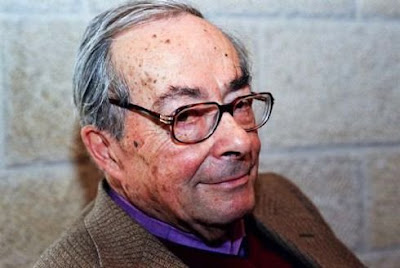