No apparent notice in sleepy, hardly voracious Blogland of Lytle Shaw’s Frank O’Hara: The Poetics of Coterie (University of Iowa Press, 2006). First chapter here in Jacket. What glints up out of my first perusal, is Charles Olson tooting out a response to Paul Goodman’s 1950 essay, “Advance-Guard Writing, 1900-1950.” Goodman:

It makes no difference what the genre is, whether praise or satire or description, or whether the style is subtle or obscure, for any one will pay concentrated attention to a work in which he in his own name is a principal character. But such personal writing about the audience itself can occur only in a small community of acquaintances, where everybody knows everybody and understands what is at stake; in our estranged society, it is objected, just such intimate community is lacking. Of course it is lacking! The point is that the advance-guard action helps creates such community, starting with the artist’s primary friends.

“. . . all this damn funny recent verse—all of it, if you will notice, directed to actual persons, composted, actually, by and for OCCASION.”

(Love that “composted”—likely a “mere” typo; worthy, though, of Jed Rasula’s attention.)

Later, as Shaw notes, Olson “quickly theorized his correspondence with Creeley . . . as producing two necessary changes that should be understood in terms of community”:

“(1), that you and I restore society in the act of communicating to each other . . . & (2), that what i mark about this correspondence is something i don’t for a moment think is peculiar to thee et me—that the function of critique is more than the mere one of clarities (as, say, Flaubert, &, Mme Sand) it is even showing itself in the very form of our address to each other, and what work goes along with it”

“I put it as of us, but, we do say to the Great Society, go fuck yrself (which Ez was not quite able to do!), and quietly create a society of our wives and friends—and without even trying to make it what DHL [D. H. Lawrence] wanted Trigaron or some such ‘community’ to be in Florida!”

One question: what “hath” Blogland wrought of “quiet” community? Does it turn out that public clamor (and posing) is no community at all? (Mostly I am caught in the colossal sweep of Weiss’s The Aesthetics of Resistance, thinking of the now-Turkish hills of Pergamum, the heroic Pergamon Altar removed to Berlin.) 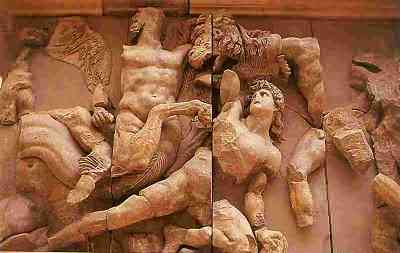 No good poetry is ever written in a manner twenty years old, for to write in such a manner shows conclusively that the writer thinks from books, convention and cliché, not from real life.